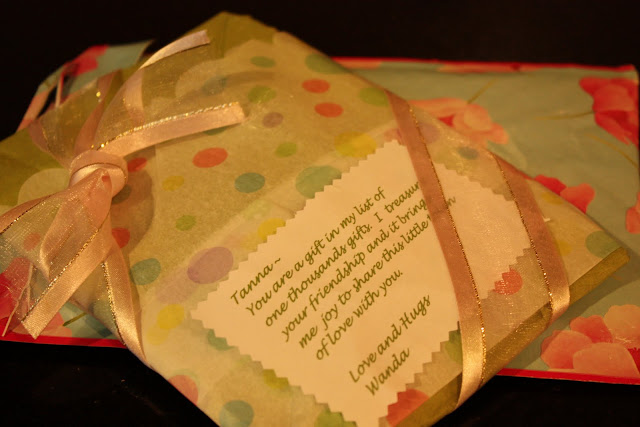 This was a most wonderful piece of "happy mail" that came Friday afternoon!  It was so pretty... even the envelope!  And, the note... JUST MADE MY DAY!!  Wanda, of Brush Strokes from the Heart, is one of the sweetest people in blogland: if you haven't met her, you need to stop by for a visit. 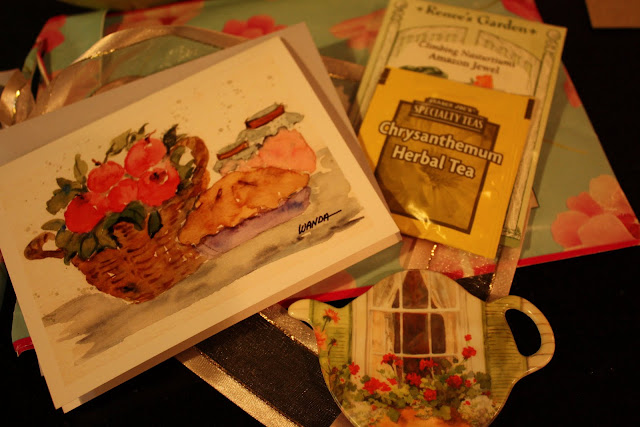 Not only was it pretty on the outside, it was FULL of precious little treasures!! 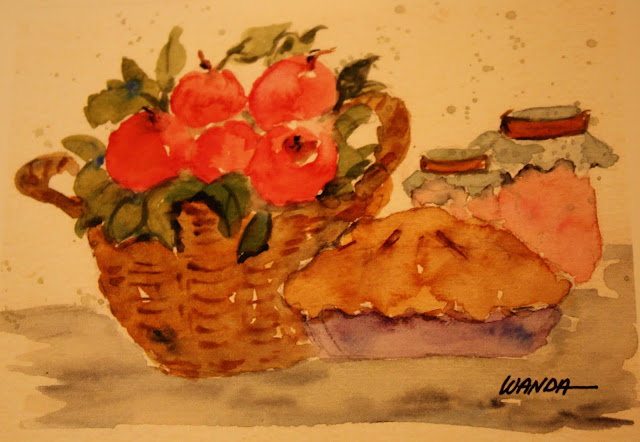 ...including a notecard by Wanda herself!!  She is an amazing artist!!  I don't think I will ever be able to use this notecard, I love it so much! 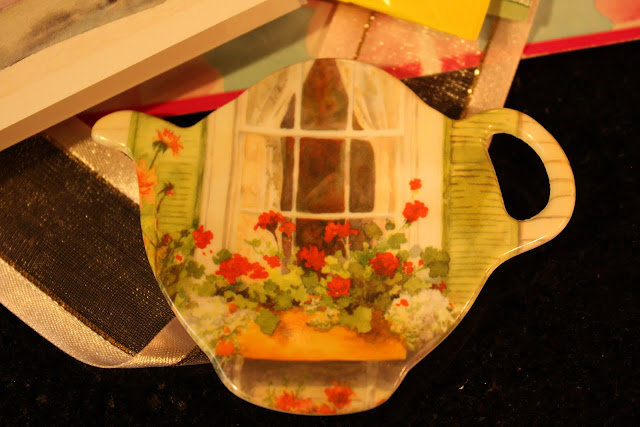 And, have you ever seen such a cute tea bag holder???  Wanda, thank you from the bottom of my heart!  I will think of you every time I use this and I can't wait to try the tea and plant my flowers!!  That was some real HAPPY MAIL! 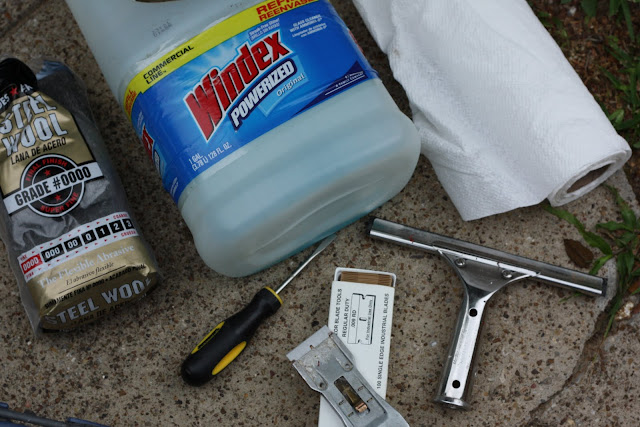 I haven't had much time to catch up on blogging lately!  I have been with my friend the single edged razor for MANY hours these past couple of weeks... cleaning windows (9hrs), removing old linoleum adhesive from a vintage tile floor (8hrs).  And, painting (NOT watercolor) and cleaning. 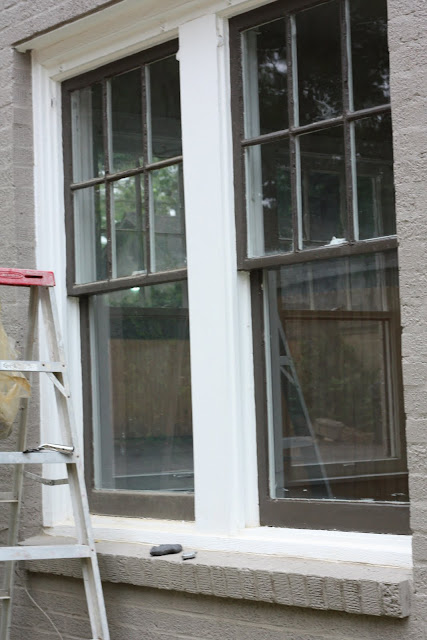 Eighteen of these babies!  I'm glad to be done with this chore.  I am still working frantically getting ready to head off to meet my new grandson who is due in only a few weeks!  Keeping my nose to the grindstone... blessings ~ tanna

Thank you again, Wanda!
at May 22, 2011 30 comments:
Email ThisBlogThis!Share to TwitterShare to FacebookShare to Pinterest 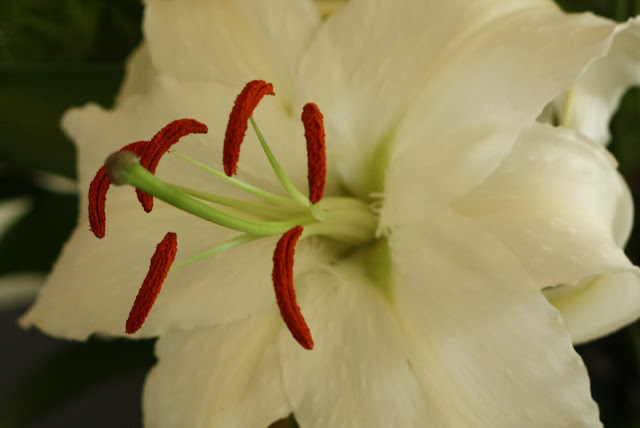 It is way too late for me to still be awake and unable to sleep.  This does not suit my circadian rhythm. 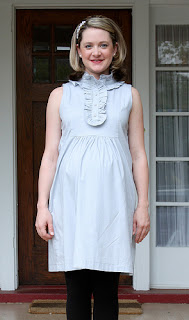 This one is nearing the "time" and there is so much to do to get ready to go.  Being awake right now is definitely NOT productive toward getting those things done... but, I can't shut it down.  Ever have nights like those?
at May 19, 2011 30 comments:
Email ThisBlogThis!Share to TwitterShare to FacebookShare to Pinterest

Hot Off the Watercolor Board! 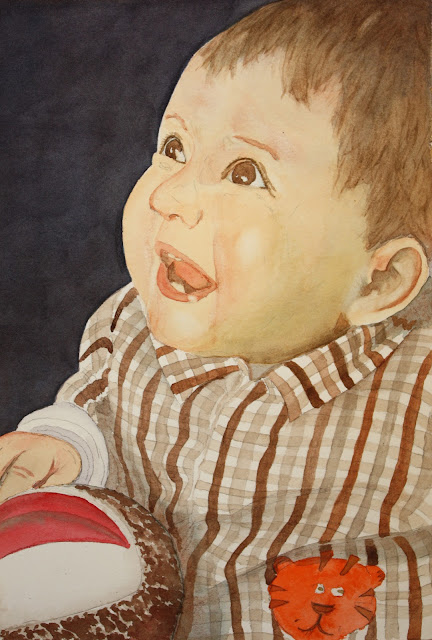 Just "finished" this a little earlier today.  It is my first "portrait" watercolor.  I would never have been tempted... except, you know...  my love of the Little Man... well, it takes me to deep waters...

Now, as I examine the painting post-photographing, I see things I would like to change.  I'm not sure you ever stop seeing those things, if you are like me... Slightly obsessive... slightly perfectionistic... Thank goodness, I have mellowed with age or I would never have been able to tolerate the imperfections of learning to watercolor... It challenges me, even now... way down the line from my most driven days.

However, at one point today (I've worked on this one several days over a period of time), I finally hit an excited moment... with the fabric... and the shadows... a moment that it felt like I might be "getting it."  Good news, for me, is that it only takes a moment of joy and excitement to incite me to continue my pursuit!  Pursuit of wonder... of joy... of satisfaction...

... that some moment gives you hope.

To see the photo that inspired this painting click here.  It was taken Little Man's Momma.

p.s. I have gotten a lot done while blogger has been down this week... hmmmm... what does that tell you?
at May 14, 2011 37 comments:
Email ThisBlogThis!Share to TwitterShare to FacebookShare to Pinterest
Labels: Noni's Little Man, Painting, Watercolors 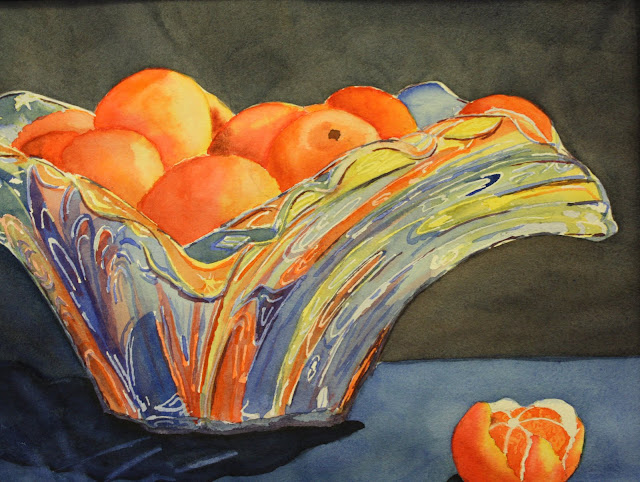 I took a day to paint yesterday and this one is still on the board, but I think I'm calling it done.  My Little Man loves clementines.   So, this one is made with him in mind... like he's ever not.  ;) 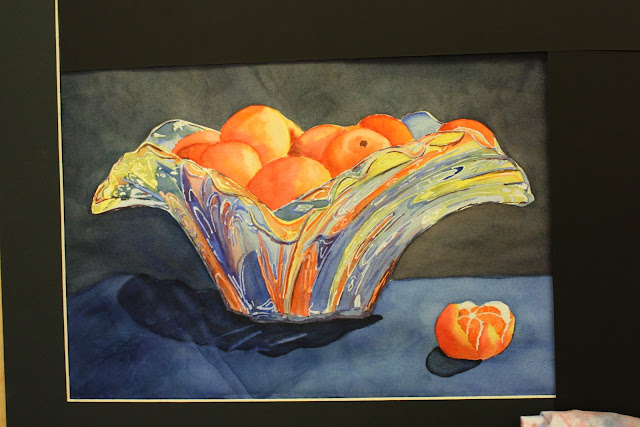 Please excuse the makeshift matt.  My friend, Patrice, and I have discovered that the semblance of a matt gives you a better perspective on your painting (as in, we think it makes anything look better to have a matt... even if it is a  makeshift one.  LOL). 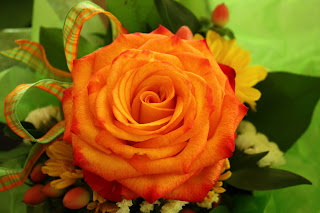 Last week when I saw this sweet arrangement, I was struck by what a good model this rose would have been for a painting I did back in February.  Makes me want to go back and add a little more red to the outer petals! 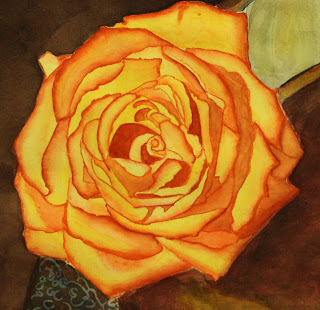 It was like seeing this rose come to life! 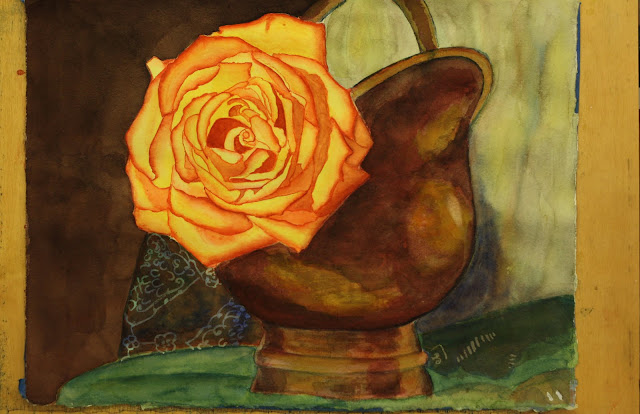 I hope to find more time to paint soon.  I have an Old Girl apartment to work on today though.   Hope you all have a day filled with sunshine and joy!

I'm linking this with Kim's (who is going to get to be a grandmother again!! Lucky girl!) Wow Us Wednesday party at Savvy Southern Style.
at May 11, 2011 32 comments:
Email ThisBlogThis!Share to TwitterShare to FacebookShare to Pinterest
Labels: Painting, Watercolors 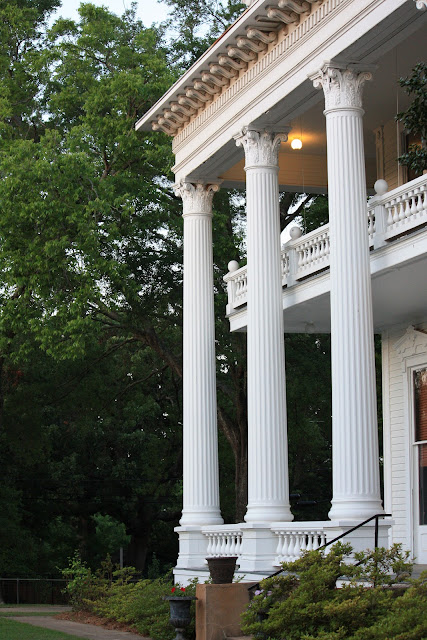 Early Saturday morning, I took a few shots for the Preservation Month photo contest in our local paper.  There are usually five photos of portions of historic properties; the person who correctly identifies the properties wins a prize. 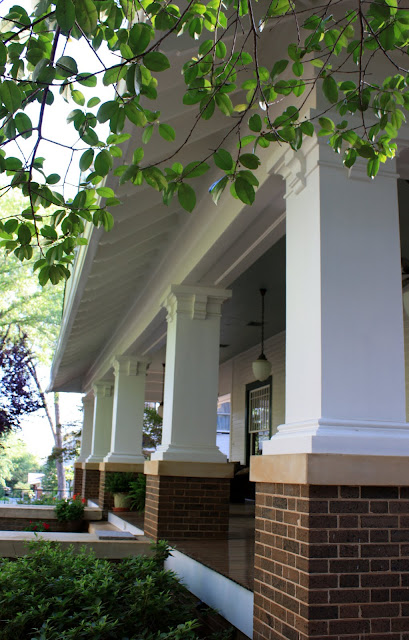 Most of the time, I can immediately identify the homes or buildings.  This year, I won't be playing along since I took the photos we will be using. 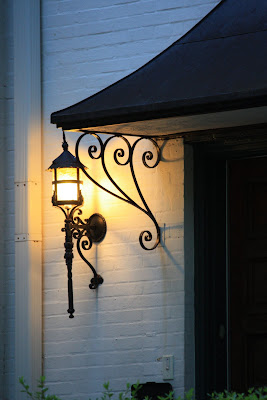 Taking those photos was the single redeeming activity I did this whole weekend!  Evan and I, embarassingly, got hooked on an Ax Men marathon on the History Channel yesterday afternoon!  Oh. my. goodness.  I still cannot believe that we watched 9 hours of that silly show!  I don't know how you get hooked into stuff like that!  It is like watching a train wreck... you just can't stop yourself! 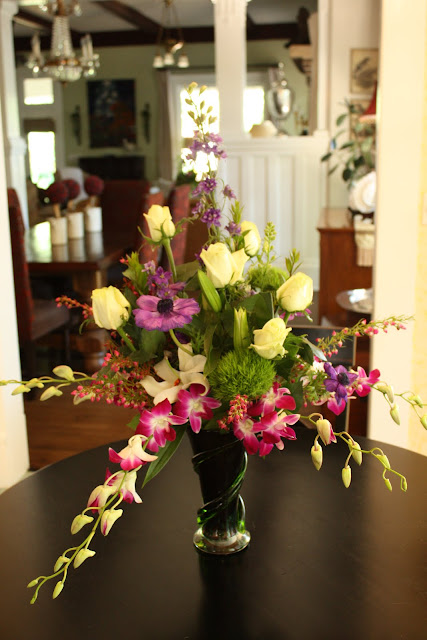 The only break we had was to visit with Audra, Brian, Gracie and Maverick when they stopped by and, for a short while, when we Skyped with Little Man and his Momma.  It was a very good rest though...  Of course, I may have bed sores from sitting on the couch so long!  Ouch!  So sad to have to admit!! 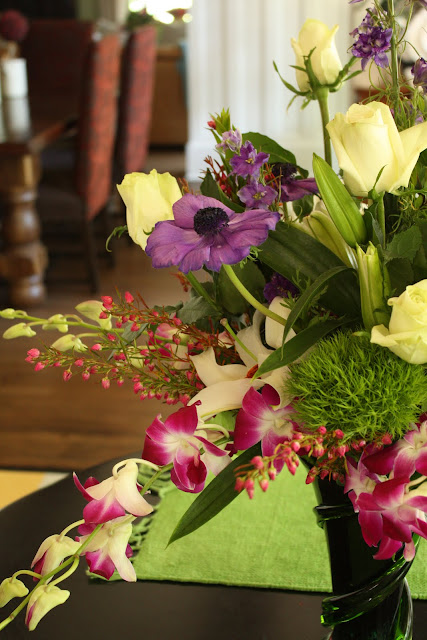 We watched right up until the season finale ended at 9 P.M.!  Don't ever start!  LOL!  Idid learn that they dredge up logs 100-150 years old that had been ax-cut and were in the bottom of the rivers or swamps until these guys pulled them up.  Some were heart pine trees that are extinct and others even more valuable.  The builders or furniture makers use them for high end projects.  One father-son logger team was paid $22,000 for 23 logs!  What can I say, I was hooked! 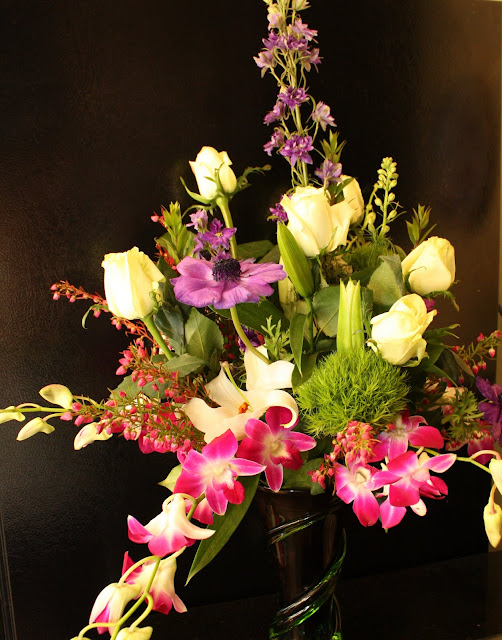 Sorry, I know y'all are sick of flower photos... but, my Beloved sent these, too... and, he has asked me five times, "Have you made pictures yet?"  LOL!  Gotta love it!  I hope each of you had a more productive weekend... or enjoyed it just as much as we did.  Blessings  ~ Tanna
at May 09, 2011 24 comments:
Email ThisBlogThis!Share to TwitterShare to FacebookShare to Pinterest 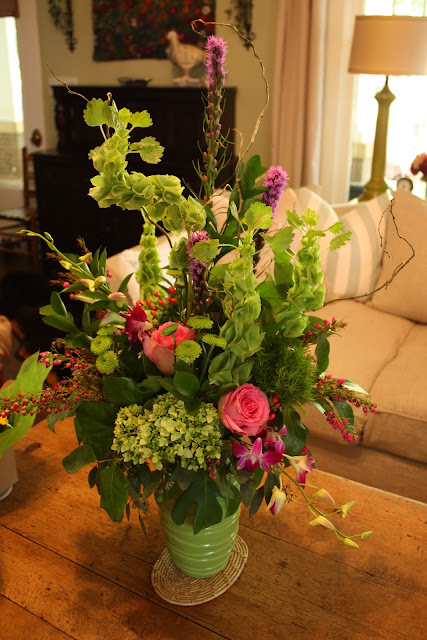 I've been under the weather for a little while.  Being trapped for four hours on a plane next to a hacking, nose-blowing sneezer was not a good thing!  Drats!  Yesterday, this beautiful arrangement arrived from my son, Zachary, for Mother's Day.  It is stunning! 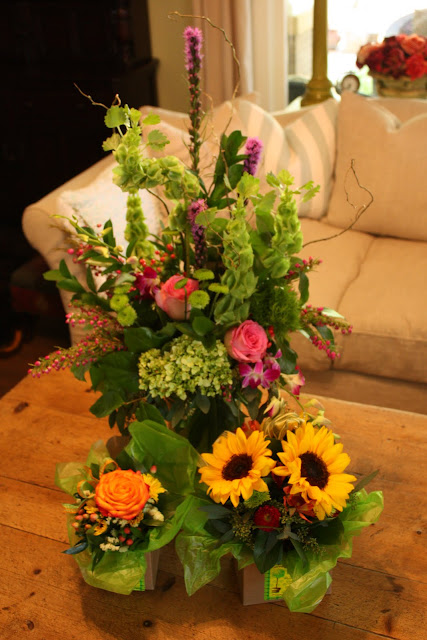 Then, the cute little arrangement on the left arrived from the sweet mother of a tenant.  And, today beautiful sunflowers from Little Man and his Momma!  I do love the French Peas Flower Shop!  Rays of sunshine all around! 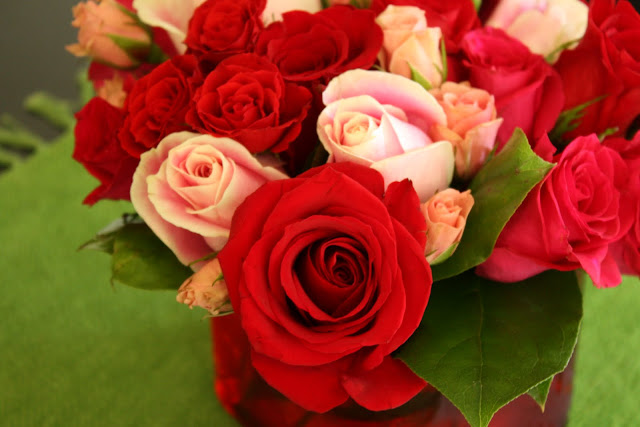 And, just a few minutes ago... this arrangement came with a 'hope you're feeling better' wish from my beloved, who is out of town.  It officially looks and smells like a florist in here!  That's gotta make a person feel better AND enjoy Mother's Day.  Thank you to all!  And, I am hoping to get around to catch up on my blog reading now!
Blessings ~ Tanna
at May 06, 2011 48 comments:
Email ThisBlogThis!Share to TwitterShare to FacebookShare to Pinterest
Newer Posts Older Posts Home
Subscribe to: Posts (Atom)

My Guilty Pleasures a.k.a. Where I Visit When I Should Be Doing Something Else...

Inspiration for this Blog